The Internet’s Most Famous Welders 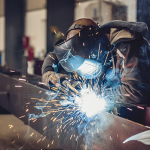 When the web was first being populated by an unwavering multitude of cat videos, a few welders managed to claw their way out of obscurity and become something of internet celebrities. Specifically, YouTube has become a significant source for “how-to” videos, equipment reviews and a place for welders to show off their more interesting projects. Here’s 3 of the most famous welders on the internet:

Chances are if you’ve ever gone to the internet seeking welding help, you’ve been met with ChuckE2009’s smiling face. While he was one of the earliest welders to get started on YouTube, he’s also the most controversial on our list when it comes to arguing about his skill set. For many welders, ChuckE2009’s videos were their 101 class. In early ChuckE videos, he does mention his lack of extensive formal training or decades of experience. But for a beginner, his videos are often the perfect lifeline for a frustrated welder learning the ropes on their own.

Of course, as with most topics in welding, people tend to be very opinionated (cough, Lincoln vs. Miller). For every 2 comments thanking ChuckE2009 for his help, there’s one tearing his technique and methods apart. While his skill set has become a discussion point, his popularity isn’t with several videos reaching over a million views.

While Colin doesn’t promote himself specifically as a “welder,” he does an extensive amount of welding in his videos. For a lot of teenagers, he’s their first exposure to what welding actually looks like. Like ChuckE2009, Colin got started early on the internet. But unlike ChuckE, there’s no tutorials or reviews here. Colin has made a name for himself by fabricating some of the most insane projects imaginable, including an underground bunker in his backyard and a retractable roof on his garage.

Colin’s most-recent welding machine of choice has been the Lincoln Speedtec 200c. It’s a multi-process machine similar to the Miller Multimatic 215 or the Lincoln Power 210 MP Multi-Process welder. All 3 of these machines are capable of doing MIG, TIG and Stick from the same unit. It’s the best way to go when you’re working with different materials in a variety of projects, especially if one of them is a flame thrower.

Wyatt Swaim (known also as Mr. Tig) is one of the most experienced welders to permeate through the internet. Long before YouTube was even a thing, Wyatt was working on aircraft, motorsports and just about anything else that required precision welding. Even today, Wyatt works as one of the sideline welders during the Indy 500.

Naturally, YouTube was a great fit for Wyatt as welding is often much easier to show then tell. Over the years, he’s built up a priceless arsenal of “how-to” videos. If you’re a TIG welder or thinking about giving it a try, Mr. Tig is a great resource to have. Unfortunately (or fortunately depending on your point of view), most of his videos are only focused on TIG welding.

While welding might not have celebrities in the same way as movies or sports, we’ve got our own brand of pop culture we share within the community. If you’re interested in learning about other well-known individuals who happen to be competent welders, check out our post all about the Myth Busters and their favorite equipment by clicking the button below.