Push Or Pull, Which is Right?

We’ve never seen a man stabbed with a welding torch, but if we did, it would most likely be over a push-or-pull debate. Out of all the debates within the welding world, it’s been the longest, most heated argument since the first welding machines were invented. Chances are, if you’ve been welding for more than a couple weeks, you’ve got your own preference. But which way is right? There must be a definitive answer as to which technique is best, shouldn’t there? Join us as we delve into the real answers behind the great debate of push vs. pull.

Although it can vary depending on your geographical location, for the most part, the pull technique is the chosen method for a larger percentage of the population than the push. But why is that? First off, pulling is usually (if not always) the technique needed for processes that have slag (stick, etc.). If you use a push technique with these processes, often you’ll end up running over the slag and getting it trapped in your puddle. This can create all sorts of defects. A few welders may argue there are ways around this problem, but most experts agree the easiest solution is simply to pull with these processes.

Even amongst processes that don’t create slag (like MIG welding), you’ll still find a large number of pullers. The reason: when you push, you’re mainly watching where you’re going. When you’re pulling, you’re mainly watching where you’re coming from. Pulling allows you to see your bead as soon as it’s created. Many welders prefer to immediately see how their weld is turning out. This prevents them from having to do the entire weld over again if they get finished and realize they didn’t have the right settings.

Finally, although it does vary depending on the situation and the type of material you’re working with, pulling will usually create a deeper penetrating weld than pushing.

While pulling might create a deeper penetration, in most situations, pushing creates a flatter weld that covers more surface area. In some instances, this can create a stronger weld than what you might get with the pull technique. 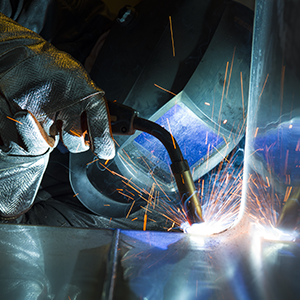 We’d love for an absolute answer as to which technique is best. But the plain and simple truth is that there’s no blanket statement “best” approach. Instead, every situation depends on the material, the process and the equipment.

In many situations, a push or pull technique can be used interchangeably (although one is usually more ideal). The major problem with trying to vary up which technique we use is that most welders don’t practice doing both techniques. Let’s say you have 3 years of experience pulling. One day you think, “I should really try pushing to see if it’s any better.” So you try pushing for the first time. And it looks terrible. So you think “Pushing is terrible, what are those idiots talking about?” But if you think about it, it makes sense. After all you’ve got 3 more years’ experience and a much better sense of what you’re doing with pulling in this example than pushing.

For this reason, many welders tend to insist that the technique they use the most is the one that produces the best welds (because it truly does… for them). If you’ve found specific types of materials and a process you always want to work with, mastering a new push or pull technique probably won’t make that much difference for you. However, if you’re looking to master a number of different processes and materials, becoming experienced with both the pull and push technique can be vital.

If you’re planning to master both the push and pull technique, just know those first several attempts are going to get messy and you’ll probably burn through more consumables than normal. Do yourself a favor and stay well stocked without spending big money at a big box store. Check out our consumables at great prices collection here.

We guarantee we didn’t cover every angle of this great debate. If you got an opinion, let us know in the comment section down below. Just know if you talk about someone’s mom in a derogatory way, we’re going to have to edit your comment.