After busting a few welding myths of our own, we’ve decided to look into 2 of the world’s most famous Myth Busters from the hit TV show MythBusters. Few fans of the show realize that both Adam Savage and Jamie Hyneman not only welded during the series, but also are quite competent in the skill. Their workpieces include everything from a waterskiing torpedo to a homemade wrecking ball. So what type of equipment did they prefer to use for such a unique and interesting array of projects? 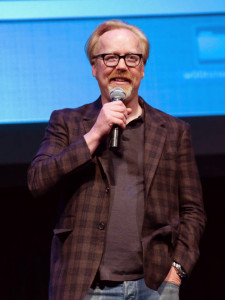 Here’s a question for you veteran welders out there: What type of machine would you use to weld dozens of legs onto a bicycle-powered, mechanical spider (a.k.a. Strandbeest)? We imagine that’s not an everyday conundrum most welders have to ponder over. But for Adam Savage, that’s just another day at work. So what is his weapon of choice? According to Adam, he prefers the Lincoln Power MIG series. “It was my very first welder,” Adam stated while showing off his Power MIG. “I think I bought it 24 years ago. Yeah, not this one,” he clarified. “My first welder I
bought 24 years ago, I’m still using the same kind because it’s fantastic.”

Diving in even deeper, Adam now uses the Lincoln Power MIG 180 Dual. It makes sense why he’d opt for the portability of this machine. The Power MIG 180 has dual 120 or 208/230 volt input power capabilities, meaning you can get it to work just about anywhere there’s a power source. This machine works really well with the way Adam tends to weld. If you’ve seen this myth buster fabricate anything, you’ll notice he’s borderline hyperactive when the creative juices get flowing. The Power MIG 180’s Diamond Core Technology creates a more forgiving arc, so the quality of his weld stills stays at an acceptable level when he’s laying down his beads in a hurry (which is pretty much always).

Check out Adam’s welding skills at work with his Power MIG 180 in the video down below: 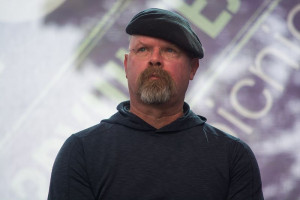 It’s been a while since Jamie has been in front of a Camera after the final episode of MythBusters. But last time we saw him talking about welding, he was showing off an army of machines he had at his disposal. For the most part, he highlighted the Millermatic 252 and the Hobart Handler 140. As Jamie explains, if you can use MIG on a project, its ease and ability to create high-quality welds at a fairly rapid pace is hard to beat.

For Jamie’s more intensive projects, few machines can match the power of his Millermatic 252. This powerhouse can weld material from 22 gauges to ½ inch thick in a single pass. In fact, the Millermatic 252 has the highest output in its class. The only downside to so much power is that the 252 won’t work with 208V power outlets.

Check out Adam and Jamie’s welding rigs in more detail with the links below: