What about the Miller Trailblazer 325?

Choosing a welder/generator isn’t some quick decision like which candy bar to buy or who to marry. It’s an investment that’ll make a significant improvement in your life, if you pick wisely. That is why any serious hobby or career welder should know about the Trailblazer 325.

The Trailblazer is often compared to the Bobcat 250. Both Miller machines are great choices. While the Trailblazer costs several hundred dollars more, that’s no reason to overlook it. In most experts’ opinions, it’s a step up. We’ll explain the exact benefits of the Trailblazer 325 so you can decide for yourself which welder/generator is best for you. 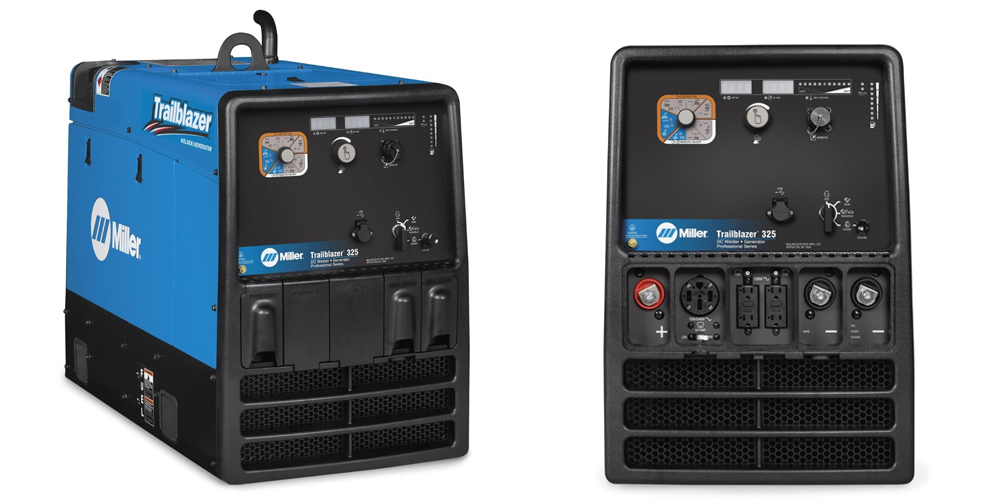 The first thing anyone will notice with the trailblazer is that it was engineered to be the perfect combination of modern advances and tried-and-tested design. It’s a sturdy, solid machine. There’s nothing flimsy about it. But it’s not impractically huge (as far as welder/generators go). In fact, the Trailblazer comes in at around 475 lbs., about 25 lbs. lighter than the Bobcat 250.

The reduction in size isn’t the only major change. Miller rotated the engine towards the front of the machine, which drastically increased airflow and efficiency while also significantly reducing noise. The Trailblazer uses auto-speed technology, which ramps the engine up or down to match the power output needed. Depending on current engine speed, the sound level will fall between 65dB and 73.5 dB. To put that in perspective, most vacuum cleaners produce about 70 dB of noise. That means the trailblazer can be one incredibly quiet machine. In fact, many welders that primarily work on or near hospitals will only use the trailblazer 325. The noise reduction also makes it easier to get an early start in the morning (perfect for areas of the country that get incredibly hot later on in the day).

The Trailblazer has the ability to do Stick, MIG and TIG with multiple settings for each process just like the best dedicated welding machines. This allows you to fine-tune the arc to match your personal taste. While other machines boast this same feature, they lack the reliability to actually keep your arc consistent. The trailblazer is one of the best welder/generators available on any market when it comes to arc performance.

While the Trailblazer is one impressive machine, there are a few points you’ll be glad you knew beforehand. First, it doesn’t come with leads. It might seem like a small thing, but you wouldn’t believe how many welders don’t realize this. Lucky for you, while supplies last, IOC will give you a free leads package worth $260 when you use code FREELEADS at checkout.

It’s also important to know that Miller is offering a $700 cash rebate on the Trailblazer 325 for a limited time. Or if you’d prefer, there’s also the option of a free Spectrum 375 X-TREME plasma cutter (with XT30 torch) or a Spoolmatic Spool gun with a 30-foot cable and WC-24 weld control. In other words, if you’ve been waiting for a promotion before you look at welder/generators, you won’t find a better time than now.