Is sMIG the New Way to Do MIG?

Machine assistance: It’s a trend that’s been happening all around us for decades, and yet we hardly notice it. For instance, you hop into your car and turn the wheel. That’s a machine making your drive smoother with power steering. You go to the supermarket. The checker doesn’t have to memorize all the products and their prices because they have a machine that keeps track of it. All they have to do is scan. When you take a step back and look at it, it’s hard to deny machine assistance has a significant impact in our lives.

Now ESAB is introducing a new type of machine assistance into the welding world. Smart MIG (abbreviated sMIG) is a function in the new ESAB Rebel 215 machines that’s designed to stabilize your arc. But how well does it really work. Join us as we look into whether sMIG could be the future of all MIG welding. 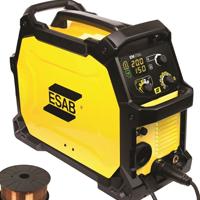 What does sMIG actually do?

When it comes to maintaining a smooth, stable arc, the real trick is consistency. Following a concise, steady speed, angle and distance from your workpiece during a weld can take decades of practice. Even highly skilled welders find it difficult to maintain total consistency, especially after a couple hours of working or while welding in awkward positions.

The idea of sMIG technology is that it monitors your technique and adapts its settings. Essentially it looks for inconsistencies that would affect the weld and changes the arc’s properties to compensate. In theory, they’re like shocks for your car. They won’t drive the thing for you, but they’ll make the ride a lot smoother.

So, does it actually work?

If you’re an experienced welder, you have every right to be skeptical. After all, sMIG sounds somewhat like you’re giving part of your control over to the machine. If you’ve developed a welding method over a number of years that works best for you, you’re probably hesitant to mess with your secret sauce. The engineers over at ESAB know this better than anyone. After all, this is the same company that released a variation of the Rebel 215ic with the traditional settings panel because some veterans didn’t want to deal with a digital display.

With that in mind, we’re glad to report that both beginner welders and those with quite a few years of practice under their belt have been giving sMIG tech the thumbs up. If you’re a beginner, sMIG essentially gives you the equivalent of 5 years of practice. The consistency and stability of your arc while using sMIG is a huge advantage over beginning welders not using sMIG.

More skilled welders will find that sMIG still gives you a lot of control over the things that really matter. For instance, you can still easily set your own wire speed and voltage settings. The real benefit experienced welders have talked about is the improved speed at which they can weld without compromising the quality of their bead.

Is it difficult to get use to? 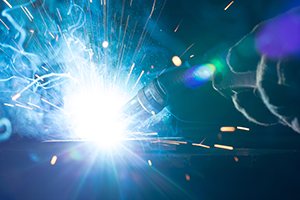 What do you think about sMIG technology?

This is where sMIG stands out among some of the newer technologies that have come out over the last decade. Instead of having to alter your process, sMIG adapts to your technique. Here’s exactly how it works. First off, you can choose whether or not you want to work with sMIG tech at all. If you’re looking to ease into the process, both the Rebel 215ic EM and 215ic EMP can be run with or without sMIG turned on.

Once you’ve decided to weld with sMIG, you can simply enter in the material thickness and wire type. The machine will then figure out all the other settings for you. However, if you’re wanting to adjust more parameters, sMIG technology still allows you to change any of the other settings you’d be able to on a standard MIG welder.
One thing you should be aware of is that sMIG was specifically designed for welding on welding steel, stainless steel, chrome-moly or aluminum. So if you’re one of those rare welders only interested in copper, you’ll want to do a little bit of research to see if sMIG technology can meet your needs.

After looking at all the different aspects of sMIG technology, it’s difficult to ignore the possibility this isn’t the future of welding in general. While it might not always have the same name, the consistency and speed that sMIG technology offers almost guarantees it’s here to stay. But there’s really nothing to fear. All sMIG technology does is takes what you do and makes it better. See for yourself with the video below!
Currently, sMIG technology is featured in the new ESAB Rebel EM 215ic and Rebel EMP 215ic welding machines.